A global mining operator has upgraded the backstop on its incline conveyors to non-rollover cam technology to prevent material pile up on stops and stalls. Tsubaki's Cam Clutch design also incorporates rollers, contributing to longer life operation, enhanced by a labyrinth seal for significantly reduced ingress. As well as enhancing operational efficiency, the backstop will also give the operator a reduced total cost of ownership. 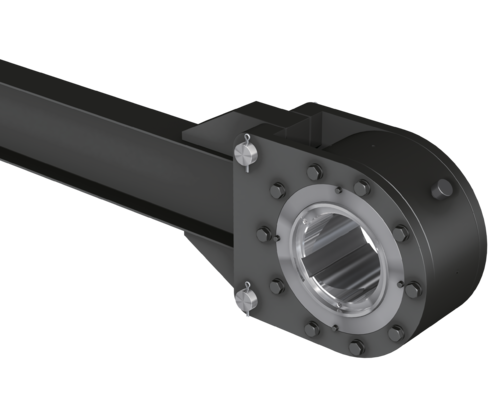 Runback, the freewheel reverse motion of a conveyor, could cause serious harm to personnel, machinery and material in the event of a stoppage or stall; especially when the belt is heavily laden. The mining operator had previously installed ratchet and pawl backstops to prevent runback. However, because of the pitch of the ratchet's teeth, backstopping was not instantaneous and involved a 'lag' that caused an element of backlash runback on each stop or stall.

This backlash was found to disrupt small amounts of material and led to pile ups on the conveyor. This in turn resulted in issues such as belt binding that ultimately meant downtime for repairs and maintenance. The mining operators approached Tsubaki's engineers to investigate and suggest a solution. It was quickly decided that Tsubaki's Cam Clutch BS-F backstops would eliminate backlash - offering the additional benefit of reduced maintenance times and long-term cost savings.

The Cam Clutch backstop design holds high backstop torque, as well as excessive torque on its flat area, up to a total of nearly 1,000,000 Nm. This creates near instantaneous stopping for virtually all conveyor applications, preventing any form of run-back and material pile ups. This significantly reduces maintenance time and increases plant productivity. Non-rollover cams prevent runback even if overloaded, providing an additional layer of safety.

"The BS-F backstop has been designed to not only ensure a safer design for operators and the protection of the machinery by preventing runback, but the cams remove any backlash on a conveyor belt stoppage," says Jake Yamamoto, Sales & Marketing Director for Tsubakimoto Europe B.V. "This has resolved the mining operator's challenge of material pile up, which was ultimately causing maintenance challenges and decreasing operational efficiency."

Jake adds: "Combined with reducing pile-up induced downtime, from our site inspection, it was apparent that the mining operator would also be able to benefit productivity by decreasing downtime for lubrication and general maintenance, as well as extending replacement intervals and lowering long term cost."

During overrunning conditions on the conveyor, the BS-F's integrated rollers operate alongside the cams within the same cage. This design, combined with lower speed of rotation and constant flow of lubrication, reduces wear on both the cams and the race. Lower speed operation also means decreased operating temperatures, which also contributes to longer life, providing reduced capital cost and less time required in maintenance and replacement.

A mining environment is tough, and ingress of dust and grit can clog up mechanisms and cause rapid deterioration of mechanical devices. With this in mind, the backstops lubrication port incorporates a labyrinth seal that prevents the ingress of dust or water. At the same time, constant lubrication flow is generated by a self-lubrication system that includes temperature adapted grease. While helping to maintain efficient operation, the system cuts down maintenance requirements with re-lubrification only required once a year.

The high torque capacity of the BS-F Cam Clutch, even against similar trapped roller designs, also enables a smaller overall backstop design. This design aspect was advantageous for retrofit on the mining operator's existing conveyor systems where installation was quickly achieved with no modifications required. The narrow width i-beam will fit virtually any existing conveyor structure with no modifications required, and the compact size also means faster, easier installation. Compact dimensions are also joined by quiet operation compared to other backstop devices.

Following installation, the mining operator was satisfied with the improved safety and operational benefits afforded by the Tsubaki BS-F backstop. Long term, the investment has also provided capital spend efficiencies.

Explore the workings of the Tsubaki BS-F backstop Cam Clutch in below video: