Chain history: why durability is key for today's roller chains

Since the industrial revolution, roller chain design has remained relatively stable. However, the most crucial developments have responded to the need to increase chain durability and lifespan. Not only has this improved safety, but these advances have driven down total cost while improving operational productivity. 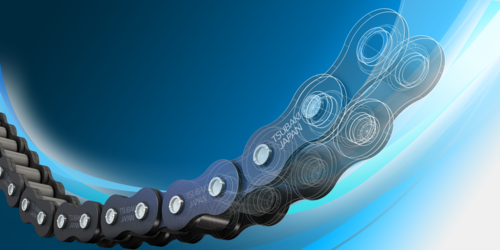 As early as the 16th century, Leonardo Da Vinci's drawings depicted his design of a chain comprising plates, pins and a roller bearing, in much the same way as modern chains are constructed today. By the late 1800s, the height of the Industrial Revolution had arrived, with the economical production of steel combined with the development in processing techniques. These advances helped the introduction of the first roller chain in 1880.

The roller chain also features inner links held together by a pair of bushes. However, now roller were placed over each bush that can rotate freely. This design significantly increased chain performance by reducing friction between chain and sprockets, improving strength and longevity.

The use of roller chains continued to expand into wider applications, including chain-driven bicycles from the mid-1880s to the Wright Flyer in 1903, the world's first powered flight aircraft.

Founded in 1917 in Osaka, Japan, Tsubaki arrived early on the scene, initially manufacturing bicycle chains. By 1928, Tsubaki too had moved on with advancing industry, now making chains for machinery. While the company's expansion included global export in the 1950s, followed by global manufacture, the original design remained relatively stable throughout most of the roller chain's history. 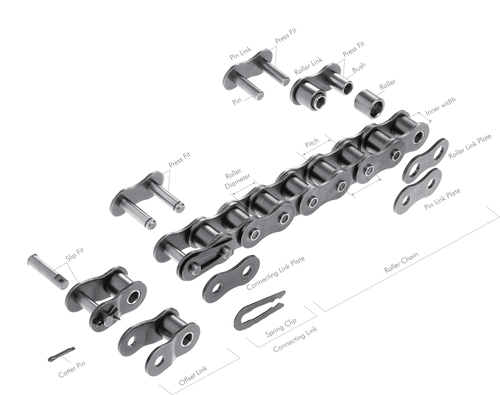 The development of lubrication-free roller chains

A significant technological advance in design was introduced by Tsubaki in 1988 with its first lube-free roller chain. The Lambda lubrication-free chain was designed for applications that were difficult to lubricate regularly, or those that were inaccessible. Another critical application for the Lambda would include those where lubrication could contaminate the manufactured product or environment. The food and beverage sector would benefit greatly, as would wider hygienic applications.

Today's Lambda chain, though far longer lasting than the original, is based on the same design. The lube-free technology includes bushes that are sintered, meaning the material is formed into a solid mass through heating without liquification. As a result, lubrication is stored inside the bushing, which is formed as a semi-porous material. When the chain heats through friction, the material expands, and the lubricant is dispersed. When the chain slows and isn't in use, it cools and the lubricant returns.

Now in its sixth generation, the Lambda Lube Free chain is supplied impregnated with NSF-H1 food grade lubricant, meaning the chain can be used across applications in the food industry. H3 grade oil is also available on request. While the chains can operate in temperatures from -10 to 150°C, a heat resistant version is available that pushes this figure to 230°C. 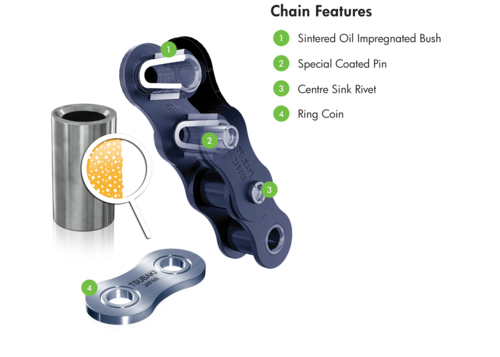 For as long as chains have been used to drive applications in wet, saline and chemical environments, rust has been an issue. Corrosion reduces chain performance and efficiency, creates contamination and leads to premature failure. For marine and outdoor applications, as well as those involving regular washdowns, in 1989 Tsubaki launched its first surface-treated chain, which underwent 300 hours of salt spray testing without developing rust.

The fourth and current generation of the anti-corrosion chain, Tsubaki's Neptune, includes a special coating as well as a resin applied over the carbon-steel base chain. Unlike some other chains subjected to anti-corrosion treatments, the Neptune retains the same strength as a standard carbon steel chain. Tested to withstand 700 hours of salt water spray, Neptune is also tested against 2,000 hours of sodium hypochlorite and 5% sodium hydroxide exposure, remaining corrosion-free. 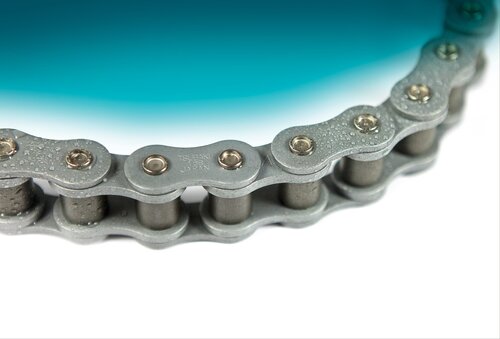 Tsubaki chains are treated with shot peening, a process that increases resistance to fatigue failure, stress corrosion cracking and corrosion fatigue, as well as cavitation erosion. Impacting a surface with shot, using round metallic or ceramic particles, and with force sufficient to cause deformation, the process adds strength and reduces the stress profile. 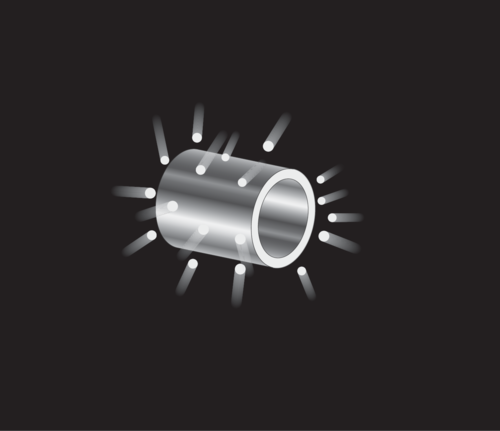 Traditionally, the connecting link is the proverbial weakest link of a chain with a fatigue strength ca. 20% lower than that of the rest. Tsubaki developed a special process to eliminate this loss of fatigue strength: the patented ring coining process. Using a cold deformation process around the pin hole of the connecting link plate results in the Ring Coin feature. This adds strength, reinforcing the area surrounding the connection between the pin and link plate that allows the chain to be specified to its full kW rating.

Applications that are subject to high levels of dust and grit, like saw mills, stone sawyers or mines, need a higher level of durability. One of the latest advances is a roller chain with nickel-plated outer chain plates and hardened pins. These features are included on Tsubaki's Titan chain, which also has bushes with specially designed lubrication grooves to hold lube at the point where friction reaches its peak. 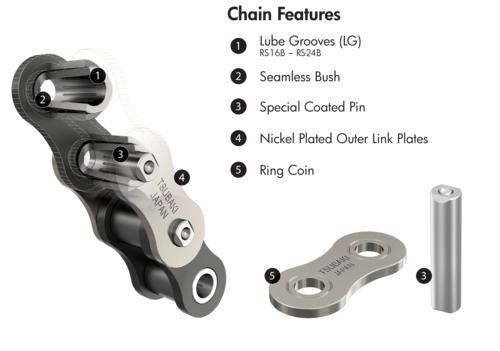 Where chains are directly connected to human safety, such as driving a roller coaster, the need to specify the most durable and safe chain is clear. Similarly, with applications that face particularly high load, the need for premium quality chains is a given, such as a Tsubaki manufactured chain for an apron conveyor at a steel mill. With individual links around a metre in length, the customer required a chain with a tensile strength of up to 3,530 kN (360 tons).

However, the trend for improved chain durability across all types of applications is increasing in the face of growing challenges to improve operational efficiency. While the benefit of low cost chains used to be reflected purely in the initial procurement budget, the consequences of increased maintenance and downtime in chain replacement is now becoming clearer as an added cost. With premium chains potentially lasting three to four times longer than low cost versions, more frequent chain replacement increases expenditure over the long term, as well as impacting operational productivity.

While roller chain design has remained relatively stable since 1880, the biggest change in technology has come from the advances that extend durability and lifespan. As efficient operations look increasingly at total cost of ownership, this coincides with a shifting perception that the chain is no longer a basic commodity but is today an integral component of a mechanical operation.