Ice cream is a food that inspires universal joy like no other. People worldwide will always need ice cream to complete the perfect day out or take the edge off a hard week. However, one factor that does affect ice cream demand is the season. Obviously, more ice cream is sold during summer than winter, which means ice cream producers have to increase production to capitalise. These duty demands can cause the premature failure of power transmission components such as chains, especially when production is taking place in sub-zero temperatures.

An ice cream plant in Germany realised that an increase in production was causing chains on its pallet lifters to fail prematurely, resulting in operational delays. To maximise chain service life, engineers at the plant contacted Tsubaki to supply a more reliable option. 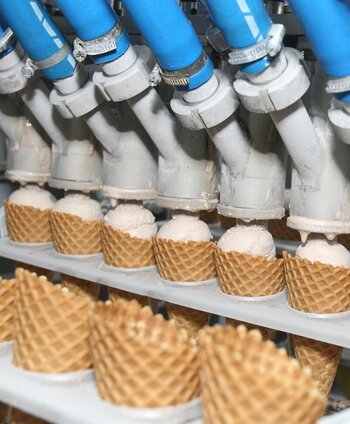 From luxury to indulgence

Historically, frozen desserts such as ice cream have been a luxury item. In ancient China, Greece and Rome, records attest to high profile members of society consuming them. In Italy during the 17th century, ice cream became popular, radiating out to courts across Europe. Modern ice cream production didn't take off until the advent of industrial refrigerators in the 19th century1. Since then, a rise in average incomes and our penchant for sweet foods has grown the market2. From being the preserve of the privileged throughout history, the global ice cream market had expanded to $57 billion U.S. by 20173.

Propping up the majority of this large sector of the food and beverage industry are ice cream plants. Designed to operate with high efficiency to maximise profits per unit, these facilities rely on equipment that can operate in an application environment that, in many places, is well below freezing and laden with moisture. For example, ice cream is cooled to a holding temperature of around -25°C for storage4. This presents increased corrosion and fatigue risks to engineered equipment.

These conditions can be exacerbated by the seasonal demand for ice cream. During the winter months, with December a notable exception, demand for ice cream falls. To reduce surplus, some facilities will scale back operations during this period. However, in summer, demand rises, which will cause facility operators to maximise available production capacity to capitalise. The inherent challenges of the application environment and the yoyoing of production intensity can cause equipment to fail prematurely. This risks facility uptime and profitability. Standard chains installed at ice cream plants are especially susceptible, so a specialised solution is needed.

As a German ice cream plant increased its production schedule from five to seven days a week to meet summer demand, engineers on-site noticed the service life of the chains installed on the pallet lifters was adversely affected. The pallet lifters were operating in a sub-zero ice cream storage area, moving heavy loads across the facility.

The nickel-plated, 16B-1 roller chains were designed to lift loads of up to 800kg. The lifter itself was driven by a 1.5 KW motor at 32 rpm. Over a five-day production schedule, the lifetime of each chain averaged to around 2 years before replacement was required. However, as production was moved to a seven-day schedule, the average service life of the installed chains fell to only six months. The inner links of the chains were breaking due to increased fatigue, a result of the combination of intense duty requirements and the cold application environment. This resulted in palletisers requiring increased maintenance work, which was reducing efficiency and increasing repair costs.

To solve the issue, engineers contacted Tsubaki, a global designer and leading manufacturer of premium quality drive & conveyor chain for most industries ranging from food & beverage to the steel industry. 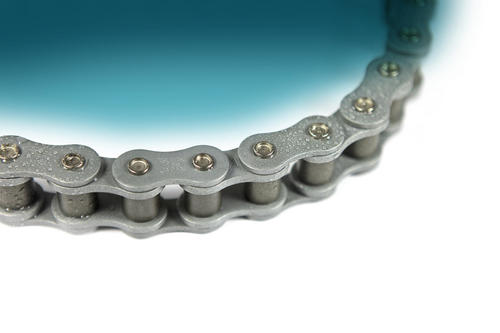 After an initial inspection, Tsubaki engineers worked closely with the engineers at the plant to specify a new roller chain that would maximise reliability and reduce maintenance. The RS16B-1 Neptune chain was selected, which offered a 20% maximum allowable load (MAL) compared to the original chain. Another key aspect was the Neptune's inherent resistance to corrosion. A specialised coating provides exceptional protection against the debilitating effects of condensation in the low temperature storage area.