Tsubaki is a GT4 Winner at Austrian pulp and paper plant

From the chipper to the roll, producing paper is a continuous process. For plant managers tasked with managing capital expenditure, sometimes budget components can find their way onto the production line. Drive chain is a classic example of a product that is sometimes treated as a commodity rather than an engineered component. One global manufacturer of pulp and paper products discovered that low cost chains on the line don't necessarily lead to cost savings once installed. Consequently, it turned to Tsubaki to reduce total cost of ownership (TCO) via a premium chain solution. 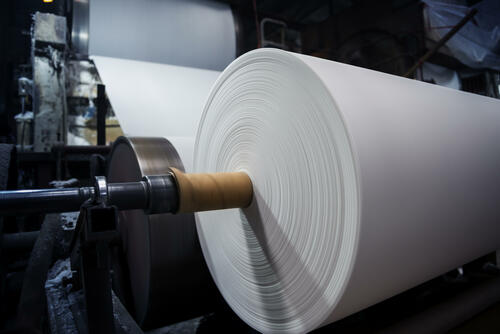 A paper mill is a demanding environment for power transmission components such as drive chain. The manufacturing process inevitably involves large amounts of abrasive dust particles in the air. This dust will contaminate chain lubricant and work its way into the chain's internals, leading to corrosion and increased wear. Ultimately this will cause the chain to elongate and eventually fail completely. The continuous nature of paper production compounds these issues, as the high duty requirements causes improperly specified chains to fail faster. It also raises the stakes of chain failure. A single unexpected chain failure can bring the entire production line to a standstill.

For a major European paper manufacturer, a paper mill in Austria was suffering from regular delays caused by chain failure - specifically the drive chain installed in the paper coil elevator. The heavy coils of paper at the site are moved by 10 elevators to different floors of the facility, ready to be cut and processed. Chains from three different brands were being utilised across the elevators, none of which were robust enough to offer long service life. The use of three different chain types resulted in inconsistent wear, resulting in the chains becoming uneven, In addition to the general atmospheric challenges of the application area, the chains installed on the elevators were regularly subjected to very high shock loads - which was causing the plates of the chain to crack.

While offering a reduced cost at initial purchase, budget chain struggles to meet application requirements long term. Premature failure leads to plant downtime, which risks order schedules. Maintenance intervals are also shortened, increasing the frequency of repairs. As a result, despite offering an initially cheap solution, the TCO of an inferior chain during its lifetime is greatly increased compared to a premium chain.

Realising this, the manufacturer approached Tsubaki to provide an improved chain solution. Offering over a century of experience in designing and manufacturing high performance chain, Tsubaki is a key supplier of power transmission components to the paper industry, as well as the agriculture, automotive, metals, mining, food and beverage sectors. A century of success is underpinned by a responsive service and a global engineering capability, which ensured that Tsubaki engineers were quickly on-site at the Austrian plant to carry out a thorough inspection.

After assessing the 10 elevators, Tsubaki identified its GT4 Winner chain as a suitable solution. Designed to provide strength in high wear environments, the chain boasts four key features which are designed to reduce wear and minimise chain elongation:

The GT4 Winner was trialled on a single elevator at the Austrian facility to gauge performance and potential benefits. Increased strength ensured that the premium Tsubaki chain could withstand the shock loads inherent to the application comfortably, eliminating the issue of cracked plates. This also minimised elongation and minimised likelihood of premature failure, which consequently reduced maintenance requirements. Longer service life, a decreased risk to uptime and reduced maintenance translated to a greatly improved TCO compared to the previous chains. The successful test period led to the GT4 Winner being installed on all 10 of the paper coil elevators.